skip to main | skip to sidebar

Celebrate a real Bangladeshi hero for a change. Nur Hossain as an ordinary man who gave his life to restore democracy 20 years ago. 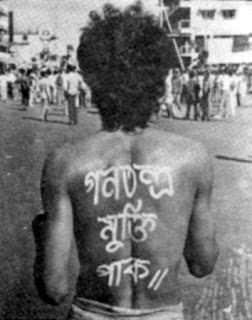 An appeal to the Bangladeshi bloggers (received via Email):

In March 1982, the army overthrew a democratically elected government in Bangladesh. The military junta cited rampant corruption and a breakdown in governance as the reasons for the intervention. The army chief, Lt Gen HM Ershad, went on to assume the presidency through farcical elections.

The general's rule, however, did not go unchallenged. There were frequent strikes and agitations. One such took place on 10 November 1987. On that day, a political activist named Nur Hossain had the words 'gonotontro mukti paak' (roughly translated as 'give back democracy') on his back.

Nur Hossain was killed by the security forces shortly after this photo was taken. See here for details.

Democracy is once again suspended in Bangladesh 16 years after it was re-established. Martyred Nur Hossain epitomizes the sacrifice and struggle of our fight for democracy.

November 10 2007 will be the 20th death anniversary of Nur hossain.

Please write a post and display his pictures on the 10th of November, 2007 as a sign of solidarity.

Donate to Survivors of Cyclone SIDR

Feel free to browse, skim, inhale deeply, comment, ask for clarification, be enraged, scratch your head (or wherever) and even DISAGREE wholeheartedly.

More? Feel free to email me at dhaka.shohor@gmail.com or add me onto facebook and rant there. Answers are not guaranteed.

Syndication (aka delusions of grandeur)